When you become a parent of a child with an illness or birth defect, there is something that happens. You spread awareness. If they do well, it is something you really WANT to do. “Look world, look at my child kicking (insert illness here)’s ass!” It is a pretty awesome feeling. When that child goes through things that should kill him yet he fights anyway. Because babies and children don’t give up. They want to live. And when they do you want to share. 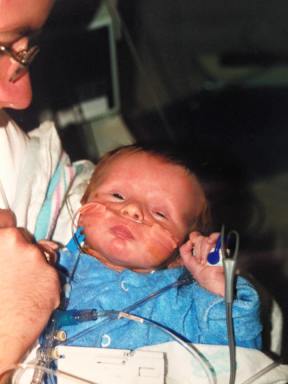 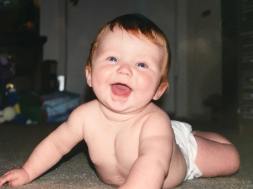 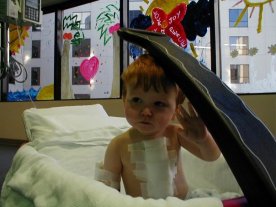 As Gabe grew he became a poster child (literally in some situations) for Truncus Arteriosus, and for Congenital Heart Defects. Gabe was even given a very special role in his school’s Jump Rope for Heart program. There was a bulletin board dedicated to facts about him and pictures from his time in the hospital. I shared some facts with the school and they shared those facts during morning announcements, giving the children at school a way to see that heart disease impacts people of all ages. When he was a toddler we started doing the AHA Heart Walk and we raised money with our amazing warrior.

Gabe rocked the hurdles thrown at him and was so amazingly positive. He was a wonderful poster child for CHD. He got attention for it and he ATE IT UP! He loved showing people how strong he was. He loved showing off his scar. The pool was his favorite place to be and I know that most of it was because he loved water but I also think at least a little bit (maybe more than a little) was because he loved showing off his scar. He didn’t want to minimize it with creams and lotions. He wanted people to know how strong he was. 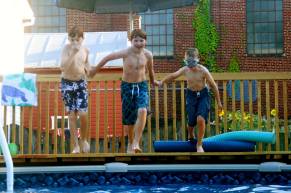 Since Gabe’s death my role in CHD awareness is kind of in limbo. When Gabe was living it was such a wonderful thing for other heart parents to see him doing well- to see what their little heart warriors may one day become. Now, though, it is very different. It is really quite awful for other parents to see what could happen to their heart warriors. Gabe’s story is terrifying on many levels. He didn’t get an infection and slowly die. He didn’t need to be hospitalized for a heart failing slowly. No. He had a perfect check up the day before. There were no signs (his cardiologists have scrutinized everything from that appointment). Nothing was off. Everything was stable. Yet just over 24 hours after that appointment he collapsed. He received immediate CPR and shocks to his heart from an Automated External Defibrillator. But in children who have undergone multiple surgeries for CHDs immediate treatment doesn’t always work. Gabe’s heart had been operated on three times. Stopped, sewn, and restarted three times. And that put him in a very bad place.

So his story is one that I hesitate to share with heart parents, especially those new on this journey or with a baby, still in utero, who has Truncus Arteriosus. It’s pretty scary to think that you could have your child there and love them for days, weeks, months, or years only to have them suddenly die and shatter the world as you know it.

But worse than that, worse than saying goodbye after 15 years, would have been never having loved him at all. Watching him go from baby to adorable toddler, to child, to teen. Every bit of the pain I feel now is worth it.

So here is my CHD awareness for right now. And it touches on something that has come up so very much recently. Often parents are told while they are pregnant that their baby has a heart defect. And often they are offered the option to end their baby’s life- because they are told their child is guaranteed a life of surgeries and suffering. Often those parents are told by several doctors, in several facilities, that it would be for the best for the child not endure those things. And often those heart defects are quite survivable with surgery.

To anyone who knew my child, did he look miserable? Did he seem to have a poor quality of life? Was his life worth it? Because I think it was. I know it was. A few months before Gabe died a dad came to my online Truncus Arteriosus support group and told of his child in utero who had Truncus. That dad asked what Gabe’s opinion was, should they continue with the pregnancy. In his wonderful 14 year old way when I asked if they should terminate he said “Tell them don’t do that, that would be stupid. I mean it’s hard but it’s not that hard.”. When I told the dad that I omitted the part about it being stupid, but I shared the rest. It’s clear to me that even as the one going through those difficulties and surgeries, Gabe still felt his life had worth.

To all of you parents with little CHD warriors, I hope Gabe’s life will teach you that every minute is worth it. To anyone who is pregnant with a CHD warrior, I ask you to consider giving them a chance to prove how strong they are. Because if you don’t give them that chance you will never know how strong, beautiful, and perfect they are. And I think that would be horribly sad.

I am a single mom to 3 wonderful boys- 2 on earth and one in heaven. I work for a local hospital helping people learn how to be healthier and access resources. I'm Catholic and have faith that I will one day see my son in heaven. This blog is about my journey- as I figure out who I am in the face of an unimaginable loss. Life is difficult but beauty can be found after the struggles. View all posts by griefmom

One thought on “CHD Awareness. What now?!”